What are “invasive species” and why do they need to be controlled?

Invasive species are non-native plants, insects and fungi which can reproduce rapidly.  They are opportunistic and find the best ways to colonize and survive.  Their annual growth can outpace that of native plants. They cause major changes to the areas where they become established.  For example, crowding native plants and reducing diversity. They can harm the environment and the economy.

The Atlantic and New England states are threatened with many non-native plants.  Some of the most common include: Ailanthus, Norway maple, Bradford pear, Japanese knotweed, buckthorn, barberry, bittersweet vine, multiflora rose, goutweed, stilt grass, privet, honeysuckle and Autumn olive. There are many other invasive species well documented in the northeastern United States.  Disturbed land (particularly abandoned farm sites), lower elevations, downstream in watersheds and densely populated areas can have a greater abundance, variety and more established colonies of invasives.  The creep of these non-native plants is slower and less of a problem at higher elevations and least populated sites. Stopping the spread of these plants requires vigilance and systematic steps of action.

The northeastern forest is threatened with non-native insects of note; they include the hemlock woolly adelgid, emerald ash borer, asian long horned beetle and spotted lanternfly. There is also the well documented and established gypsy moth. New to New Jersey is the southern pine beetle. These insects can attack and kill dominant forest species such as hemlock, ash, sugar maple, oak and pine with devastating economic and environmental effects.

How can a solution be implemented?

Focus control on a meadow or woodlot. Allow for access and trails. Begin a process of cutting invasives with follow up sprays. Monitor plant growth, inventory plant species and be prepared to continue this process. 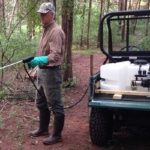 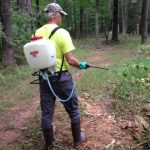 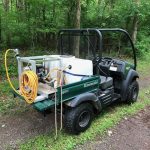 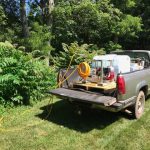